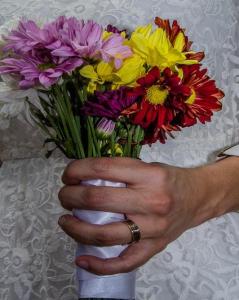 In a world that spins on an axis of technology, it’s not surprising that people are now reverting to Skype in order to join in holy matrimony.

This past Saturday, a Californian couple’s wedding plans were upset when the groom caught a lung infection that left him in an isolation room of the hospital. The couple, Samuel Kim and Helen Oh, was expecting guests and family from New York as well as from their native Korea. When Kim first realized he was sick, he was scared to tell his fiancé for fear of ruining her special day. Later, when she found out, they improvised and held the wedding despite his absence by using the Web video conferencing system.

The Bride Held Her Ground

In an interview with Reuters from his hospital bed, Kim said “Guests said it was inspirational, they really admired my fiancé for being able to stand at the altar in the manner that she did, alone and not crying the whole time. She was able to hold her ground and I was able to hold my ground, not crying or anything.”

Oh admitted that the Skype wedding was not the ideal ceremony, but that guests were happy. “He said he will make up for it, he promised me he’s going to be the best husband in the world,” she said. “He felt really terrible that he wasn’t there.” She added that she “couldn’t have done it without God.”