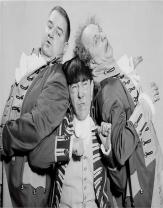 The feisty radio host Howard Stern has come to an agreement with Sirius XM radio to continue to jockey for them until December 31st, 2015. Known to many as the ‘shock-jock,’ Stern has been known to swear while on the air and often discusses subjects with decidedly adult content. He has been forced to pay fines for some of his more vulgar behavior.

For the first time Stern will be available to mobile listeners, which should help boast the already large number of fans. Analysts have estimated that Stern attracted 1.2 million new subscribers to Sirius XM when he came aboard, helping them reach about 20 million listeners today.

Due to expire this month, the previous 5 year contract was worth $500 million. The details of the contract have not been released, but Lazard Capital Markets analyst Barton Crockett guesses that Stern will get $80 million each year in cash, the same as his present salary, but does not include $100 million in stock over five years which was part of his expiring contract.