The Technological Way to Diet

Make carb-free spaghetti! Yes it’s true. You did not read this wrong. But we’re not talking about real spaghetti as it were. We are talking here about the latest kitchen gadget – and dieter’s dream – to hit America: the spiralizer. 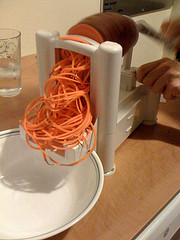 Rather than use pasta to make, well, pasta, today we can now use vegetables. Huh? Often known these days (in the UK where they call zucchini courgette) as the courgetti, one takes a zucchini and “spiralizes” it so that it takes on the look (and sort of the consistency too) of a traditional string of pasta. Throw some pesto sauce over that or finish off with your standard sloppy joe (spaghetti Bolognese in England) recipe and voila! Pasta, but without the carbs! What could be better.

Indeed, it is also a great way of adding color to your plates (according to dietitian, nutritionist, and certified specialist in sports dietetics, Rebecca Turner, one should always go for: red, orange, green and white on their plates for optimum health and antioxidant power) without even feeling it.

And it’s proving popular. In 2014 a spiralizer was branded by the Hemsley sisters, sold out at Selfridges in weeks – indeed 27 times more than they thought they would sell. So if it’s health, color, fun and ease you want to bring to your kitchen, table and your kids’ plates, check out the spiralizer; you’ll wonder why you ever used anything but cauliflower to make your pizza base again!

If you’re wondering how you transform your vegetables into spaghetti, reach for the latest must-have gadget, the spiraliser. If the verb “to spiralise” has not yet entered your lexicon, get a grip. Last year, the Hemsley sisters branded their own spiraliser, which was sold through Selfridges and sold out in weeks – as did Lakeland’s, which went on sale this year. “We knew it would be a hit, but not to this extent,” says Wendy Miranda, Lakeland’s customer ambassador. “By the end of March, we’d sold 27 times more spiralisers than we’d estimated for the entire spring and summer seasons. I can’t think of another gadget that’s flown out this fast.”

This entry was posted in Lifestyle and tagged courgetti, Hemsley sisters, Selfridges, spiralizer. Bookmark the permalink.