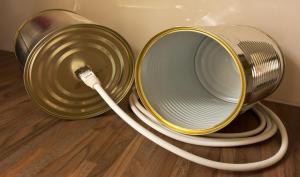 Japan has developed a new hi-tech fashion, called “Necomimi”, meaning “cat’s ears.” These white ears are worn on the head, and they reflect a person’s mood or emotions.

Necomimi have two brain-wave sensors which can identify the emotional state of the wearer, and express them with four different positions. When a wearer is feeling focused, nervous or alert, the ears shoot upright, and flatten when a person is relaxed. When a reader is both focused and relaxed, like while reading a book or playing a video game, the ears spin in slow circles. During times when brain activity is especially low, the ears flap back and forth.

Neuro-control is an area of technology that is currently being researched in an effort to help disabled or “locked in” patients, who are conscious but are unable to communicate in any way. Necomimi’s developing company used the technology in an experimental, more toy-like way. While many find this approach childish, the developers have explained that this technology, as well as ones like it, could be used as a communication tool for people who are more shy and withdrawn near strangers.

The cat ears are not completely accurate, however. Kana Nakano, one of the creators, explained that cat ears react differently in nature. “For example, when cats are frightened or want to scare away an enemy, they flatten their ears. But with Necomimi, flat ears mean a relaxed state of mind. We have changed the meaning to suit human perceptions. To humans, it’s kind of cute when cat ears are flat. So the most difficult bit was to fine tune cat ear movements.”