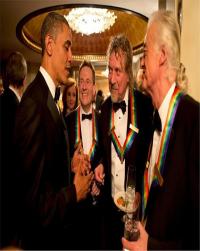 Brave New Films tried to stop the creation of a new miniseries about President Kennedy even before it went into production after the script was submitted for perusal to leading historians such as Ted Sorensen and Thurston Clarke. These scholars said that the proposed miniseries was chock full of unmitigated distortions of the truth.

Despite the disapproval, the film was made, starring Greg Kinnear and Katie Holmes in the roles of John and Jacqueline Kennedy. The History Channel however, has made a decision not to allow it to be broadcast, thus protecting its own reputation and the history of the Kennedy legacy, and even the idea of what history is itself.